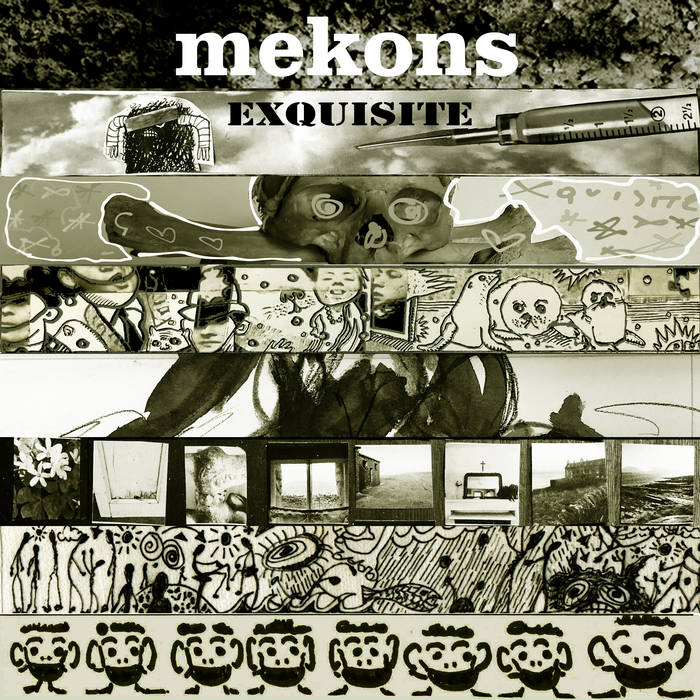 drbaz I ❤ The Mekons.
Check out their doco if you haven't seen it.

Otto D. Struct It's the fucking Mekons, isn't it? What else do you need? Favorite track: Escalera.
more...

In Paris, in 1925, Yves Tanguy, Jacques Prévert, André Breton and Marcel Duchamp invented a game they called ‘cadavre exquis,’ derived from a phrase that came up when they first played: 'le cadavre exquis boira le vin nouveau' ('the exquisite corpse will drink the new wine'). Basically each collaborator adds to a composition in sequence, either by following a rule or by being allowed to see only the end of what the previous person contributed.

In the current plague year 2020, after a planned rendezvous in Valencia was necessarily cancelled, mekons adopted this method as a means of collectively assembling lyrics and tunes and recording their new album.

Locked down in various locations, scattered from the West Coast of California to the East End of London, they sang and played into their mobile phones and emailed, uploaded and Whatsapped their wailings, beatings, scratchings and strummings around the globe through the billions of interconnected nodes of our networked panopticon. Mike Hagler assembled the results in Chicago and sent them to be mixed by The Baron at Chateau Trumfio.

With the US/UK now twinned together under Prime President Minister Dominic McDonald-Johnson’s death clown kakistocracy, avidly acting out the disaster capitalism playbook while twin plagues of ancient systemic racism and the American virus continue to ravage and kill and squawking out of this nightmare sleep of reason, come chlorinated chickens home to roost in a nest of hypocrisy, impunity and conspiracy.

While we look towards a worse economic depression than the 1930s, scanning our eyes towards the horizon of annihilation, take joy while you can from falling statues! And, well, you just might be tired from having to take to the streets: what better time to settle down with a fancy hydroxychloroquine cocktail, mainline some bleach and dig the mekons’ new surrealist sounds?

Max Ernst Crawfish
trumpet on ’Nobody’

Ricardo Jolie Chose
lead guitar on ‘What Happened to Delilah?’

Tracks collated by Mike Hagler in Chicago
& mixed by The Baron at Château Trumfio.

The notorious Mekons Punk Rock experiment has continued uninterrupted since 1977 proceeding in sporadic bursts, unwilling to expire. In 2019 the Mekons released DESERTED and toured triumphantly through Europe and America. The band that made such iconic albums as FEAR & WHISKEY and ROCK’N’ROLL etc. has defied ill fortune to record a new album called EXQUISITE while in social isolation. ... more

Bandcamp Daily  your guide to the world of Bandcamp

Serena Cherry debuts her black metal project, plus a Pick from the Crypt block from Svalbard